>If you’ve been following along with the debate on conference blogging, you’ve surely been reading Daniel McArthur’s blog, Genetic Future. His latest post on the subject provides a nifty idea: presenters who are ok with their talks being discussed should have an icon in the conference proceedings beside the anouncement of their talks so that members of the audience know it’s safe to discuss their work. He even goes so far as to present a few icons that could be used.

On the whole, I’m not opposed to such a scheme – particularly at conference like Cold Spring, where unpublished information is commonly presented and even encouraged by the organizers. However, Cold Spring is one of the few rare venues where the attendance is “open”, but the policy on disclosing the information is restricted. It’s entirely regulated for journalists, but in the past has not been an issue for scientists. However, if a conference begins to restrict what the scientists are allowed to disclose outside of the meetings, the organizers are really removing themselves from the free and open scientific debate. A conference that does that isn’t technically a conference – at best it’s a closed door meeting – and the material should explicitly be labeled as confidential.

Assuming that the vast majority of presentations can’t be discussed without explicit permission is quite the anathema of science. If you look at the way technology is handled in western society, you’ll see a general trend: The patent system is based around the idea of disclosure, copyright is based on the idea of retaining rights after disclosure, and even our publication/peer review system demands full disclosure as the minimum standard. (Well, that plus a wad of cash for most journals…) For most conferences, then, I suggest we use a more fitting model than opting-in to allow disclosure, as proposed by Daniel. Rather, we should provide the opportunity to opt-out.

All presenters should have the option of choosing “I do not want my presentation disclosed.” We can even label their presentation with a nice little dohicky that indicates that the material is not for public discussion. 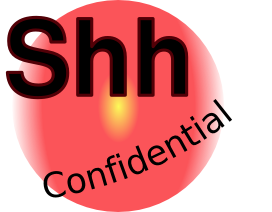 Audience members who attend the talk then agree that they are not allowed to discuss this information after leaving the room. Why operate in half measures? It’s either confidential or it’s not. Why should we forbid people from discussing it online, and then turn a blind eye to someone reading their notes in front of the non-attending members of their institution?

Hyperbole aside, what we’re all after here is a common middle-ground. Science Bloggers don’t want to bite the hands of the conference organizers, and I can’t really imagine conference organizers not being interested in fostering a healthy discussion. After all, conferences like AGBT have done well because of the buzz that surrounds their organization.

As I said in my last post on the topic, Science does well when the free and open exchange of ideas is allowed to take place, and people presenting at conferences should be aware of why they’re presenting. (I leave figuring out those reasons as exercise to the student.)

Lets not throw the blogger out with the bathwater in our haste to find a solution: Conferences are about disclosure and blogs are about communication: aren’t we all working towards the same goal?