Actually, the original post said “Is bioinformatics on decline?”  That lack of consideration for English grammar might be a bit of a foreshadowing for the flavour of the arguments that I’ll relay below.  (Granted, I would never ignore a post solely because of bad grammar and the author is clearly not a native English speaker, so lets not dwell on that point.)

The last point is a great indication to me about the quality of the information you’re about to hear from him, in my opinion.  Anyone who claims to be interested in search engine optimization is all about hits, not about quality of information disseminated.  That’s a simple guarantee –  and I’m certain that Mr Brij has gotten a lot of hits on his web page by making what is not a controversial statement, but an obtuse one.

In essence, I believe this whole claim is likely more about driving traffic to his blog than making a valid contribution to a discussion.  I regret having visited it already, and I certainly won’t be linking to it.

In any case, lets deal with his first two points.  The first is that “People are asking what bioinformatics is about.”  To me, that indicates that more people are interested in the field, rather than that fewer people are interested.  If he never had to answer the question about bioinformatics, then I might be concerned that he’d either saturated the world with people knowledgeable about the field, or that no one new was hearing about it.  Clearly the first is impossible.  (So long as I have family members, I can guarantee first hand knowledge that there are people who are clueless about what bioinformatics really is.)

In reality,  this is just anecdotal evidence that the author is relaying.  We’re better off ignoring it and assuming that the conclusions drawn by Mr. Brij are just inaccurate extrapolations from bad data.

Instead, lets look at a different set of words:  {bioinformatics, biotech, pharma and antibody}. This will give us a control experiment, as there are magazines and entire industries devoted to watching biotech and pharma for trends.  If either of those were in steep decline, it would undoubtedly be all over the front pages of every industry publication. 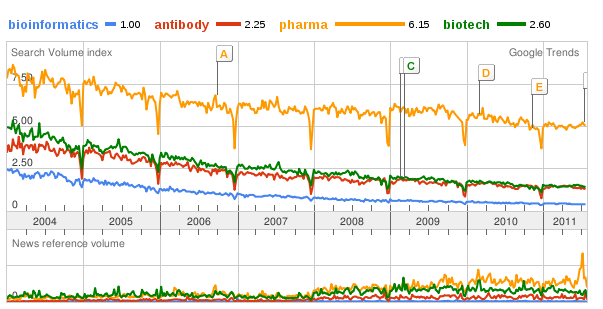 Guess what?  They all show exactly the same downward trend!  (Even down to the little dip over the North American winter holidays.  I’d definitely be interested in hearing more about that phenonmenon!)  Does that mean that the pharma and biotech industries are going to be extinct in the near future?  Not so much – it’s simply a function of the overall traffic on google.

I surmise that in order to predict the decline of something on the web, you’ll need much more useful information than the proportion of google searches that include a specific term.  People haven’t stopped using antibodies over the past decade and bioinformatics sure as heck hasn’t gotten any less popular.  Frankly, I doubt most bioinformaticians spend their time googling for “bioinformatics” anyhow, which makes this a pretty moot point.  We all have better things to do.

The third point from the original author is that this somehow relates specifically to bioinformatics in India.  I’m not even going to deal with this point other than to say that the data presented doesn’t support this claim.  No statistics are presented on Mr. Brij’s blog and the excerpt from an excel spreadsheet that is given only demonstrates that there is fluctuation in the frequency of the search terms by month.  It’s not at all enlightening.

So, if I may pass along one piece of advice to the “SEO expert” Mr. Brij: Instead of trying to get more traffic to your site by placing links to your blog next to poorly phrased questions on popular web sites, I suggest you try to produce quality analyses and insightful observations.  That will drive up the number of hits you get in the long term far more than trying to suck people in with ridiculous claims.

In the meantime, I won’t be visiting your page again.

6 thoughts on ““bioinformatics is in decline””